Is Creationist Ray Comfort An Idiot Or A Liar? At the MTV Video Music Awards last week, Miley Cyrus' dancing shocked millions of people. Her dance routine included something called twerking. It is a sexually suggestive move, with hips thrusting, low squatting, and wobbling and jiggling in an up-and-down motion. She was also wearing skin-tone latex "underwear" that feigned nudity. And we at FrogBook.com say, "So what?" C'mon, the woman is twenty years old. And her demographics (fans) have also grown up with her. Anyway, with the Internet, kids today are quite aware of sexuality whether Miley Cyrus twerks or not. What her critics are basically saying is that she should act like a kid forever. Nonsense.

And now, Creationist and evangelical preacher, Ray Comfort, comes out to basically call Miley Cyrus a prostitute. What an A-hole. Ray Comfort is not new to the Frog Blog. In 2009, we wrote about how he collaborated with actor Kirk Cameron to link Adolf Hitler to Charles Darwin! Read our article, “Creation Vs. Evolution: Darwin Defamed!” This man professes to know better than a lot of fields, including physics and evolutionary biology. But in fact, he only has a high school education and didn't even have any formal training in theology before he began preaching as a minister. The two words that best describe this fool is "ignorance" and "arrogance."

Ray Comfort's arguments are really stupid. Once he said that the banana is the atheist’s worst nightmare because only God can design such a perfect fruit. Later, he was told that the hybridized bananas we all know today in the supermarket have been domesticated for 5,000 to 8,000 years. The original bananas from which they came were hardly edible without cooking. He later retracted his banana statement. His general idea against science is a simplistic one: Things are complicated, so God must have created them. This concept brings forth the obfuscating term, "Intelligent Design."

But one can easily show that complicated things, such as a snowflake, can be created by something that is not intelligent or conscious, such as our atmosphere. Based on simple logic alone, without having to delve into biology or physics, one can shoot down Comfort's ludicrous assertions by using a simple mental experiment. Let’s assume that the universe and life forms were indeed created by some form of Intelligent Design; but how do we know that it wasn't Satan who did it all? Our world is full of suffering, evil, and violence. One can argue with the same line of "logic" used by Comfort that it could only be Satan who could have created our world.

On a more specific level, Comfort's main point of contention with evolutionary scientists is that there are no fossils of a transitional species such as a "Crocoduck" – a cross between a crocodile and a duck. So, based on this line of thinking, if there are no animals evolving into one another, then only God must have created all the different species. But animals do evolve, just not in such a dramatic way. Over millions of years, they evolve through both the slight variations in their offspring and through the more pronounced genetic mutations in their offspring. And these variations determine which offspring will survive and which will not in a particular environment, allowing the survivors to give birth to the next generation of offspring that may expand further on these unique genetic traits. Through natural selection, animals adapt better and better to their environment through each successive generation. In our article, "New World Record For Smallest Woman," we discuss how the human species is likely the result of a pronounced genetic mutation, click here.

~ This type of image is misunderstood by many people.

We at FrogBook.com believe many long-held misconceptions about Evolution are partly caused by pictures like the one above. "Evolutionary Walk" pictures have been around for over 100 years; and people incorrectly infer from this type of image that one creature "morphs" into another due to Evolution (like in the case of the Crocoduck). No, they ALL have independently evolved from a common ancestor. Humans and chimps have a common ancestor, but we did not evolve from chimpanzees. Our ancestors might very well resembled modern chimpanzees in certain ways – but then again, they might not; evidence is beginning to emerge that shows our earliest ancestor as being not ape-like and was walking upright millions of years ago. Therefore, what Creationists call the Missing Link – a "transitional species" between humans and apes – may not exist at all, click here.

Now, back to Miley Cyrus. Ray Comfort has been presented with such a great preponderance of scientific evidence over so many years that even a moron would get it. Yet, he continues to preach his lies. Perhaps the Banana Man is not as stupid as we think (no one is this dumb). Perhaps HE'S the one who has prostituted himself in his quest to expand his ministry, his book sales, and his DVD sales. In his arrogant and audacious quest, he has committed the cardinal sin of willful ignorance, click here.

(September 10, 2013) There is a YouTube Video published six days ago titled: "Worst Twerk Fail EVER - Girl Catches Fire!" And it received over 10 million hits. It shows a girl twerking and she ended up catching on fire. And it didn't take long for the media to blame Miley Cyrus, click here. But it was revealed on September 9th that it was all a hoax by Jimmy Kimmel. The original video is 37 seconds long. The entire unedited video is 56 seconds long.

~ The twerking fire girl is a stunt woman.

(September 18, 2013) Hercules is no "Crocoduck" or some other transitional-species animal, as we mentioned earlier in this article ("'Cyrus Prostituted Herself': Creationist"), but this lion and tiger hybrid made it into the Guinness World Records as the world's biggest feline on September 17th. At 922 pounds and 131 inches long (almost 11 feet), Hercules is about 1.7 to 2.8 times the weight of an average male lion; it is also about 1.3 to 2.0 times the length of an average male lion. Relative to tigers, Hercules is even bigger. 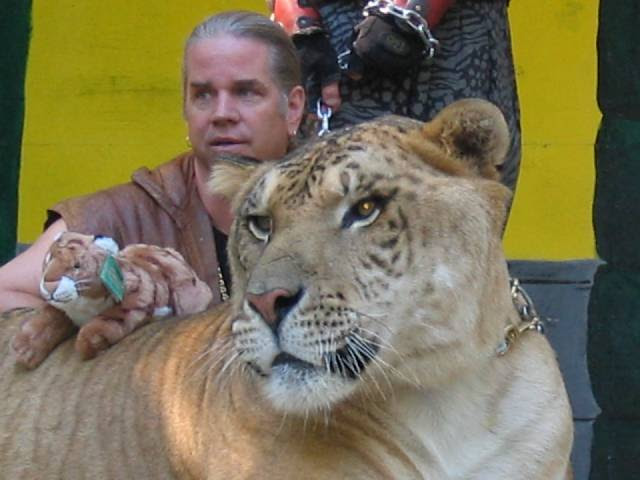 For ligers, their fathers are always lions and their mothers are always tigresses. And according to scientists, the reason why ligers sometimes can be so much bigger than their parents is because of the different breeding strategies of lions and tigers. A lioness will mate with multiple partners and the males all try to pass on offspring that can outgrow their competitors in the womb. The lioness compensates for this by passing on a growth-inhibiting gene to her offspring as well. But a tigress will only mate with one male tiger and due to the lack of competition in the womb, the growth-inhibiting as well as growth-promoting genes do not exist.

(October 3, 2013) Read our latest update on Bigfoot. Some "experts" claim it is some kind of human hybrid, click here.