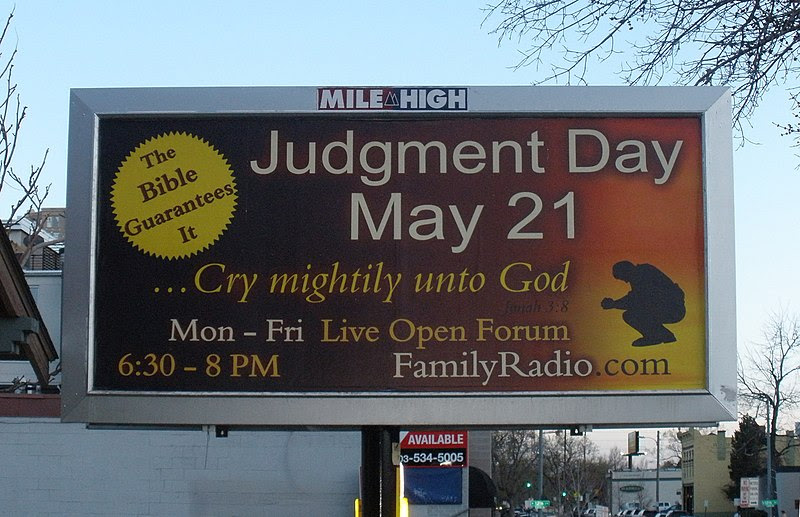 First, let's address the current madness. Religious nut Harold Camping and his Family Radio network told their followers that the world was going to end on May 21, 2011. Some of these gullible idiots actually donated their entire life savings to promote the Rapture by paying for advertisements such as billboards all over the world (including in Islamic countries and Israel). We at the Frog Blog say that's great! People who don't use their brains deserve to lose all their money (and self-respect). At least now, they may learn from their own bitter experiences and start to live in the REAL world.

~ A fool loses his life savings.

After all, these morons are really cheering for the horrid death of all humanity (except themselves) because of what they arrogantly judge as "sins" in others. Not unlike the hate-mongers and nuts at the Westboro Baptist Church, Camping and his flock blame gays and lesbians for the End-Time. But of course, the laws of probability and commonsense had the last laugh and Camping received nothing but mockery after Mis-Judgment Day.

Scientists predict that the Earth will continue to support life for another 500 million years. And the chance that the Earth would be struck by a gigantic asteroid is extremely remote. So, predicting the end of the world is a mug's game.

2012 will be a big year for those halfwits and ignoramuses who are convinced that the end of the Maya Calendar (Dec 21, 2012) indicates the end of the world. This Maya nonsense has had much more traction in the media and public awareness than the crap that came out of Harold Camping. There was even a Hollywood movie in 2009 titled 2012 with a Maya End-Time theme. Expect more opportunistic movies like this to come out by the end of 2012.

But the Maya theory also has to contend with those very same mathematical odds mentioned above. And clearly, while the Mayans were great astronomers, they were lousy astrologers! They failed to predict the arrival of the Spanish conquistadors and their apocalyptic effect on their OWN society! So who cares what the Maya Calendar might have predicted for the end of the entire world centuries later?

Also, the most important thing to note is that the Maya Calendar is marked by 395-year cycles, and December 21, 2012 simply marks the end of one cycle and the beginning of another. The ancient Mayans couldn't have kept making calendars endlessly. It was simply coincidence that they ended their calendar-making with the current cycle, click here.

[Updated Insert – May 24, 2011: On Monday, May 23rd, this damned fool, Harold Camping, announced that Doomsday will now occur on October 21st, 2011. Distraught and humiliated, he has now turned this mess into a slow-motion train wreck, especially for those dumb suckers who were financially harmed by his callous hubris. But Camping has denied all responsibily and will likely not repay any donations made, click here. Also, read stories about suicides related to this moron's prediction: click here.]

(May 17, 2013) It seems just two years after Harold Camping's idiotic predication of the end of the world, his Family Radio ministry may now face the Apocalypse itself. Donations have dropped 70% after his prediction deadline came and went, but that was not Family Radio's death knell as Camping had made failed predictions years before. What is really causing the end for Family Radio is Camping's own recognition that such predictions are wrong and that he should stop making them.

It seems there are plenty of idiots out there who would happily hand out donations ONLY if you tell them the world would end. They want those whom they disapprove of as sinners (like gays and lesbians ) to suffer in the Tribulation while they themselves would be saved by the Rapture. This is a very hateful and selfish mentality. But it seems there might be a God after all. Those morons who gave to Camping got nothing for their money and received no refunds while Family Radio is now dying of the same slow gruesome death that their followers wished on all the "sinners" in 2011. Click here.

UPDATE: End Of The World Coming In September?