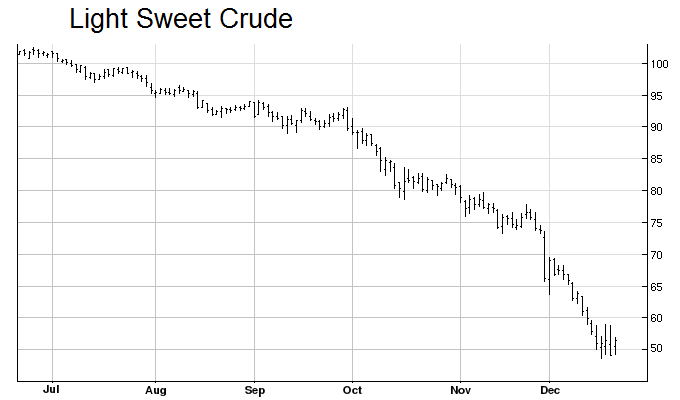 Under the leadership of Saudi Arabia, the Organization of the Petroleum Exporting Countries (OPEC) has decided to not cut output despite falling prices, creating further downward pressures on oil. This is primarily because non-OPEC nations like the United States, Russia, Canada and others are producing oil and gas at full-steam. So, it makes no sense for OPEC to lose its market share to non-OPEC nations while trying to maintain the status quo by cutting back its own sales, click here.

In fact, shale technology has made the United States the world's largest oil producer in 2014! See our April 14, 2014 article titled, "Obama Likely To Approve Keystone XL." (In that article, we had predicted that the U.S. would become number one by 2015; but on August 2nd, we updated a video embedded in the piece to reflect the lastest news.)

~ What is hydraulic fracking?

Besides trying to hurt American and Canadian fracking and oil sands projects, there might also be geopolitical reasons for the actions of Saudi Arabia and its rich Gulf allies (such as Qatar, the United Arab Emirates, and Kuwait). These Gulf monarchies might be trying to hurt a fellow OPEC member – Iran. Saudi Arabia and its friends are Sunni Muslims while Iran is Shiite Muslim. Iran is an ally of Syria, ruled by the ruthless dictator, Bashar al-Assad. The Syrian government is controlled by the Alawite minority that is currently fighting the Sunni opposition on several fronts. It is also fighting against the Sunni terrorist Islamic State (or ISIS). Financial support for ISIS and other Sunni terrorist groups from private Saudi, Qatari, and Kuwaiti citizens is a well-known fact, click here.

Iran has been under great financial distress due to the punishing United Nations sanctions over its nuclear program and this oil crash might be designed to rub salt into its wounds, click here. In addition, it's possible this is Saudi Arabia's revenge for Iran's past cyber attacks against the oil facilities of the rich Gulf states, click here.

And as for major non-OPEC oil producer, Russia (also an ally and arms-supplier of the Syrian government), it has been hurting badly from the European and American sanctions over its aggression in the Ukraine; and this oil crunch is making life even more unbearable. The Russian central bank recently raised interest rates to 17% from 10.5% overnight while the ruble turned into rubble. Further deterioration of Russia's currency and financial markets is expected.

But in general, as the situation in the Middle East deteriorates, Saudi Arabia (with a population of only about 31 million) wants to be a major player in the world again; and by recapturing and dominating the global energy markets, this will give it the power and prestige it needs to be more relevant. The price it is willing to pay for this power is revenue.

~ Miles per gallon of vehicles are rising over time.

So, is OPEC targeting green energy as well? The short answer is yes. Without a doubt, aggregate demand of fossil fuels has gone up due to the rise of developing nations like China and India. However, demand per capita in developed nations has dropped greatly due to technological improvements made in the efficiency of cars as well as in the supply of alternate forms of energy such as solar, wind, and nuclear power.

In addition, the expansion of public transportation systems and the growth of hybrid, electric, and even hydrogen cars are making a real difference. And the public's positive attitudes toward conservation to slow down Climate Change are also making a dent in fossil-fuel demand. Indeed, the public has been buying smaller cars in recent years. But now, with lower gasoline prices, larger cars like SUVs are likely to come back into fashion.

Regardless of the public's latest taste in cars, it is always in the back of OPEC's mind that its members cannot hoard the oil forever as green technologies continue to make advances, click here. As time passes, they will be under more and more pressure to sell their oil on the cheap – to sell off their inventory while the selling is still good. As long as the shale technology is there, and as long as the world is determined to combat Climate Change by using more and more clean energy, cheap fossil fuels are here to stay. This will put some pressure on the funding and development of renewable energy. Greater government subsidies will likely be needed in this regard.

~ Greater subsidies will be needed for renewables.

[Updated Insert – November 6, 2015: President Obama has denied a permit for the Keystone XL pipeline project (see video below. This should not be a big surprise as he vetoed a bill from Congress in February (read the article from Reuters: "Obama Vetoes Keystone XL Pipeline, Leaving It In Limbo"). Besides Obama's concern for the environment, the two other unexpected factors that might have influenced his decision are: 1) the surprising increase in local shale oil and gas production, making Canadian oil less desirable, and 2) the sudden drop in the world price of oil (around $50 per barrel) makes tar sands oil (produced at around $75 per barrel) untenable.]