Should Such Callous Theme Parks Be Banned?

The controversial documentary Blackfish premiered in limited release two weeks ago in theaters across the U.S.; and CNN is expected to broadcast the movie on October 24th, 2013. We at the Frog Blog highly recommend this documentary to our readers, not just for its thought-provoking message, but also because it is just a very well-made film. On RottenTomatoes.com, Blackfish has generated a consensus rating of 97% among film critics, click here. 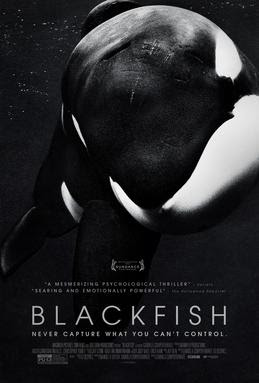 In the past, FrogBook.com has published a number of articles about the tragedy of animal exploitation and the dangers faced by the handlers of wild animals. Read our past articles: "Moron Lets Infant Play With A Gorilla" and "50 Exotic/Rare Animals Killed In Ohio."

Our position has always been that a "domesticated" or "tame" wild animal is an oxymoron. Wild animals such as killer whales can NEVER "connect" or empathize with humans like dogs can. It is impossible to "tame" a wild/exotic animal because to do so would require countless generations of selective breeding (it is believed that it took thousands of years for the dog to be domesticated, click here). And just because a wild animal is highly intelligent and can learn silly tricks to obtain treats or food, that does not mean it is tame like a domesticated dog is. Because wild animals can never accept a human as one of their own like dogs can, this poses a problem brought up by the film: When trained wild animals are under stress, they may attack and kill people that they have known all their lives.

~ Should killer whales be tourist attractions?

The need of wild animals to be wild and to roam free over very large distances has been HARDWIRED into their genes for millions of years; this can never be "trained" out of them by humans even if the cruel process spans their entire lifetimes.

And we now know that killer whales have a tight social structure in the wild, and the bond between a mother and her calf is extremely strong; they often live together for life in a group. So, tremendous distress is inflicted on both the mother and the calf whenever they are separated in a siege at sea, where the baby is taken away to a theme park.

~ The cruelty inflected on killers whales.

While many performing killers whales nowadays were born in captivity, many other working whales still are from the wild and were once separated from their mothers at sea. And those calves born in captivity will eventually be separated from their mothers when they reach the age of four, which is also a source of much mental anguish. Such psychologically damaged creatures are then kept in confined spaces throughout their lives, forced to perform monotonous tricks for noisy crowds year in and year out. And later, when they themselves have offspring, further trauma is inflicted on them when they are separated from their own babies, which are sometimes taken to other theme parks.

So it should not be surprising that performing killer whales sometimes kill and maim their trainers out of frustration. SeaWorld's Tilikum was captured from the wild when he was just two years old in 1983, and he later killed three people. But as one of SeaWorld's most popular attractions, Tilikum is still forced to perform to this day.

~ Dolphins identify one another by name.

Killer whales are very smart animals, so their confinement for years and years in austere spaces that are tantamount to bathtubs for humans just compounds their psychological torment. We think this is the reason why killer whales in captivity tend to live shorter lives than those in the wild.

And in a recent report on their cousin, the dolphin, it has been shown that dolphins display great intelligence by assigning names to one another in their family unit in the wild. Similarly, when a pod of killer whales is being pursued by humans for their calves, they would devise ingenious ruses to confuse and divert the pursuers by separating the mothers and babies from the males who are the decoys, showing a sense of self-sacrifice and higher consciousness. So, it is really a shame that such majestic and intelligent creatures are treated in such a horrible way.

As responsible people, we should set an example to others and our children by avoiding theme parks that exploit wild animals for profit. Educate others and your children on why you've taken this position. SeaWorld, MarineLand, and others are a throwback to an archaic past, when animals were abused for our amusement in circuses and rodeos. Instead, observe killer whales in their natural environment. Money poured into enterprises such as whale-watching tours and cruises will help protect the killer whale's habitat.

(March 8, 2014) In part due to the film Blackfish, the "Orca Welfare and Safety Act" is to be introduced by State Assemblymember Richard Bloom in the California legislature. This bill would not ban the captivity of killer whales, but would prohibit the use of orcas for entertainment purposes. This is a good beginning, because that would significantly reduce the usefulness of the whales to the theme parks, thereby reducing the number orcas to be kept. However, an outright ban would have been better.