How Will This Affect Climate Change?

In early July, scientists met at the Royal Astronomical Society in the UK, click here. A new model that predicts the Sun's solar cycles was presented and the results were shocking. One of the researchers, Professor Valentina Zharkova of Northumbria University, claimed that the model has an unprecedented accuracy rate of 97%; and this model predicts that solar activity will drop by 60% at around 2030 – possibly creating a mini ice age on Earth!

~ Changes in solar activity over the years.

This anticipated phenomenon of the Sun has been compared to the Maunder Minimum (also called the "prolonged sunspot minimum"), a period between 1645 and 1715 in which very few sunspots were observed. And during this time, lower-than-average temperatures were recorded in Europe. And it was reported that winters in both Europe and North America were very cold. These types of drops to the temperature on Earth after the Medieval Warm Period (950 to 1250 AD) are referred to as the Little Ice Age (around 1550 to 1850 AD, bracketing the Maunder Minimum).

~ A mini ice age could last decades or centuries.

Before we go further, let us digress: If there has been a long term uptrend of sunspots (expected to top out around now, see NASA video at the bottom of this article), then one could argue that Global Warming might have been caused by solar activity rather than by excessive carbon dioxide (CO2). This has been the main argument coming from Climate-Change deniers for years; and this new theory on the mini ice age is something that they are vigorously promoting. One of their main academic supporters is astrophysicist Dr. Willie Soon of the Harvard-Smithsonian Center for Astrophysics. And while his research is heavily funded by the energy industry, we should not dismiss his claims without further investigation, click here.

Image created by Robert A. Rohde. (Click on image to enlarge.)

~ Has the long-term uptrend in sunspots caused Climate Change?

The answers to #1 is 'yes'; as the image immediately above shows, CO2 has risen to unusually high levels after the dawn of the industrial revolution.

And the answer to #2 is that humans are the likely cause of the rise of CO2 in the atmosphere; see video immediately below. According to NASA, 97% of the world's climate scientists believe Climate Change is caused by human activities, click here.

~ Fact: humans ARE creating more CO2 in the atmosphere.

The answer to questions #3 and #4 is 'yes' – BOTH CO2 and solar activity probably have an impact on temperature; but the issue here is the relative magnitude of each.

Evidence of the the effects of carbon dioxide on temperature are extremely strong. This relationship has been understood for over a century and has been proven many times through scientific experiments and empirical evidence, click here.

~ How CO2 warms the atmosphere.

Based on the data we have, there also seems to be a relationship between solar activity and the Earth's temperature. But after 1980, this relationship appears to have diverged (see chart immediately below). This suggests that excessive CO2 may be a much more powerful driver of climatic events than solar activity.

~ Is this divergence caused by CO2?

What is quite curious is that this period of divergence corresponded with the rapid industrialization of China a number of years after the death of Chairman Mao Zedong in 1976. China's development has relied heavily on the burning of coal and other fossil fuels, click here. Perhaps China's CO2 emissions have maintained a steady but steep rise in temperature that otherwise would have leveled off along with the leveling off of solar activity. (The effects on the climate made by China is discussed in our earlier article: "U.S. To Cut CO2 Emissions By 1/3 In 15 Yrs.") 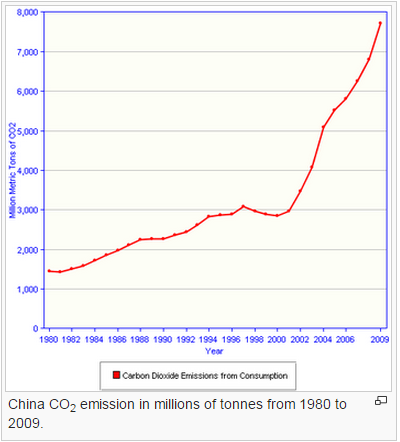 ~ China, India and other developing nations are industrializing.

The bottom line is, there is still a lot we don't understand about solar activity and its effects on the Earth's temperature, magnetic field, radio signals, communication satellites, and power lines (read our earlier article: "Solar Flares To Peak In 2013 – Disaster?").

The possible drop in temperature due to the reduction in solar activity around 2030 would likely to be insignificant, click here. And our current Global Warming situation might neutralize – or at the least mitigate – any effects from a temperature drop that might occur.

~ NASA explains the solar cycle. "Isn't something to worry about."

On the other hand, if the temperature drop is greater than expected, any mini ice age that might emerge from this solar event is unlikely to be catastrophic, if history is any indication. However, it might still be strong enough to mitigate to some extent our current Global Warming predicament. This second scenario would buy our planet a bit more time to wean off fossil fuels (the Intergovernmental Panel on Climate Change, or I.P.C.C., recommends an end to fossil fuels by 2100, click here).