On October 21st, Sesame Street introduced the first autistic Muppet to the world, Julia. It is hoped that Julia will cultivate a greater sense of inclusiveness among children. The reduction of stigma and the promotion of understanding and knowledge can only be a good thing. Sherrie Westin, Executive Vice President of Global Impact and Philanthropy at Sesame Workshop said: "Sesame Workshop is uniquely positioned to play a meaningful role in increasing peoples' understanding about autism. This project is an extension of the belief we've always promoted: 'we are all different, but all the same.'" 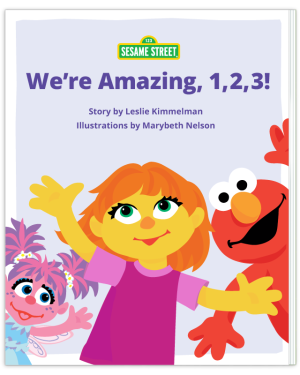 But a bunch of crackpots are already attacking Julia, hoping to draw attention to the unproven and ridiculous claim linking vaccines to autism. In their paranoid minds, Julia is a ruse used to normalize autism caused by vaccination. The crazy implication here is that ONLY vaccines cause autism and that ALL methods used to address the autism issue in society are somehow related to vaccines.

Today, scientists are still not sure what causes autism. It is a condition of abnormal brain development and it is not a disease. Genetics may play a role. But one thing is certain, there is absolutely no proof that vaccines cause autism. This is the position of the Centers for Disease Control and Prevention (CDC), click here. Even the Autism Science Foundation says this theory is not true, click here.

~ Julia is about inclusiveness, not vaccines.

One of the critics of Julia, whom the Frog Blog believes is either a kook or a shyster, is Mike Adams. He believes there is a vaccine social-engineering plot and a cover-up that are the result of collusion between Sesame Street, the CDC, the mainstream media, Big Pharma, and the United States government. Worse than that, Adams charges that Julia promotes vaccines and that would make autism more prevalent. It's delusional.

Mike Adams is the founder of NaturalNews.com. In our opinion, it's just a rag of misinformation and we recommend that our readers not waste their time on it.

From Wikipedia.org: "Adams is an AIDS denialist, a 9/11 truther, a birther, and endorsed conspiracy theories surrounding the Sandy Hook Elementary School shooting, those surrounding the Deepwater Horizon oil spill, and those involving Malaysia Airlines Flight 370. He has endorsed Burzynski: Cancer Is Serious Business, a movie about Stanislaw Burzynski. Steven Novella characterizes Adams as "a dangerous conspiracy-mongering crank." Adams has also written a favorable review of the pseudoscientific film House of Numbers on Natural News, which is reprinted on the film's website. Adams has also endorsed the books of conspiracy theorist Jim Marrs."

Most of these ignorant theories about vaccines and other conditions such as autism are based on correlative studies. This so-called growth of autism in society is likely tied to better diagnosis over time, and that "growth" is then correlated by incompetent fools to other data, like that of vaccination rates.